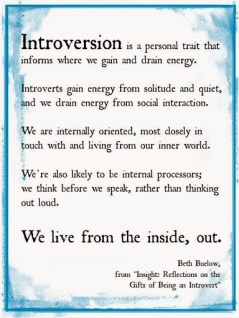 18 months ago I started on a new journey of self exploration and understanding.  I had heard about the term HSP or Highly Sensitive Person and began learning about it.  From there I learned that many HSPs are introverts.  Having heard the word but not really knowing much about it that was the next stop in my research and in doing so a door was opened to a cavern of self understanding.

Finding out why I came home from having a great time at the pub with a blinding headache was an utter revelation.

Understanding why I don’t cope with sudden changes of plan helped me handle it better when it happened.

Simply knowing that there were other people like me meant I could start doing what I enjoyed rather than trying to keep up with the extroverts who echarge through socialising.

Once I found out about this I went out to find other innies and it turns out there is a bit of an introvert spring going on.  People are working to get introversion understood so that we are not misclassified as depressed, shy or rude and I think this is wonderful.  But!  We need to tread carefully. 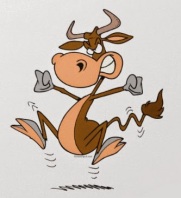 As with so many things that have been in the darkness for so long, when there is a shift it can create a pendulum swing effect; going from extreme to extreme.  Standing on the sidelines watching I am seeing articles coming out trying to teach people what introversion is and how to treat introverts but so many seem to be people stamping their feet insisting that everything is done their way.  Personally I don’t believe that this is the way to make progress.  Yes, we need to be understood but if we act like a child that must get its way we will achieve nothing because the pendulum will soon swing the other way with the extroverts insisting that they have special treatment too.

As an introvert I do need people to understand me.  I need them to be aware that if I say I would rather not come out that is because I am tired and need some time on my own.  However, I also need to understand that if I never hang out with my friends they won’t be friends for very long.

As an introvert I prefer the written word to talking as it gives me the time I need to form a sentence that truly says what I mean.  However, I also need to understand that other people are not as happy with writing or there is a sense of urgency and so prefer to talk.  This means I may prefer to text or e-mail someone but I also have to pick up the phone when someone calls.

Getting introversion accepted as a personality trait and not a mental illness is important but needs a balanced approach, give and take.  Introversion/extroversion is a continuum, a bell shaped curve with people at both extremes but the majority of people nearer the ambivert centre.

If we show that we cannot accept personality traits that are different to ours how can we ask people to do the same for us.  This shift is necessary but it needs to be made carefully and with compassion if it is going to go well.


Severn Close
Wellingborough
Northamptonshire
NN8 5WF
07808-066-138
I offer sessions most week day evenings and at weekends. Contact me for details.

My dreams for CrystalOak are to bring support and compassion to a world that often seems dark and frightening.

Working full time as a Bookkeeper and having a full time income means that this is not about making money.

My prices are low because I believe in
everyone having access to complementary therapies, not just
those with disposable income.

This is not a job.
This is my passion.